Tyson Fury sensationally knocked out Deontay Wilder in the 11th round of their WBC heavyweight title at the T-Mobile arena in Las Vegas on Saturday night. And while the future is rosy for the British heavyweight, the same cannot be said for Wilder who will have to think long and hard about what he wants to do.

At the start of their third and final match, Wilder came out throwing long armed punches to the body of Fury as if he was trying to adopt a more tactical and patient approach. But in the third round he found himself on the floor. Things took a diversion in the 4th, however, when the champion was sent down twice by right hands. Fury managed to get to his feet on both occasions and battled back. The exhausted challenger was knocked down again in the 10th and then by a huge strike in the 11th to end the fight.

There have been few words by Deontay since the fight ended, only briefly saying:

“I did my best, but it wasn’t good enough tonight. I’m not sure what happened. I know that in training he did certain things, and I also knew that he didn’t come in at 277 pounds to be a ballet dancer. He came to lean on me, try to rough me up and he succeeded.”

His trainer Malik Scott has also claimed that Wilder has fractured one of his hands.
Fury said after the fight:

“I was down a couple of times, I was hurt. Wilder is a strong puncher,” said Fury of his opponent, who was taken to hospital as a precaution after the fight. It was a great fight. I will not make any excuses. Wilder is a top fighter, he gave me a run for my money. I always say I am the best fighter in the world and he is the second best.

“Don’t ever doubt me. When the chips are down I can always deliver.” 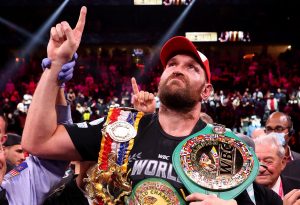 Tyson also insisted he was not hurt in that thrilling 4th round.

“I have proved time and again that I can never be written off. I didn’t have my best performance but I pulled it out of the bag when it needed to be done. He did keep getting up but it was that final right hand to the side of the head that finished him.

I wasn’t hurt. You get hit, you wake up on the floor. I got up and was very conscious the whole time. I was one punch away from knocking him out in the whole fight.

I am the greatest heavyweight champion of my era, without a doubt. Number one. If you play with fire long enough you will get burned.”

So the likes of Oleksandr Usyk, Dillian Whyte and perhaps Anthony Joshua could be all on Tyson Fury’s radar right now.

But what about Deontay Wilder?

Well, obviously he will want to have a long rest before mulling over his options in boxing. It is fair to say that the American’s time at the very top level is just about over. But those suggesting that he should retire (and I’ve seen a lot of those recommendations by fans!) might be thinking a little too harshly.

Wilder can still make for a good gate keeper at heavyweight for the young guns of the division such as Tony Yoka and Frank Sanchez. And maybe, just maybe, that his stock would actually have increased a little after giving a good account of himself in terms of his heart and determination.

In the event that Watford’s Anthony Joshua loses again to the Ukrainian heavyweight champion, Oleksandr Usyk, in their 2022 rematch then maybe Wilder and Joshua could meet in what would be an exciting crossroads fight for them both.

Maybe things aren’t really all that bad for the explosive punching Alabamian, after all.